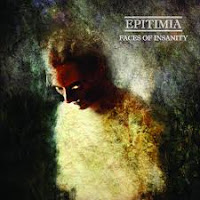 From the first song of this album you cannot be sure of what you will hear: depressive black, ambient black or just an experiment of the three members in a more post-rock sound? What's certain is that you are going to hear a dark innovative album, completely different from any other band in the ambient black metal scene, ideal for those who want to experiment with new sounds. Depression and melancholy is pervasive throughout the whole album, which is enhanced from the almost theatrical low screaming vocals in ‘Reminiscentia’ or the more pure black vocals in ‘Epikrisis I’ and ‘Epikrisis III’. The post-rock influences of the band are evident in ‘Epikrisis III – Megalomania’. ‘DS: Schizophrenia’ incorporates all the elements of the Epitimia’s style, which is definitely much more sophisticated and experimental than the two previous works of the band. This atmospheric / ambient black metal band from St. Petersburg, Russia does not stop to surprise us, giving a new meaning in ambient black and makes us wonder what is left to hear in its future work.
(Dark Alice's nightingale)