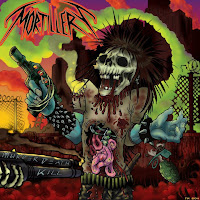 Canadian thrashers Mortillery have finally released their debut album since forming in 2009, and man, is it something else. This is most definitely, without a single hint of doubt, the most authentic thrash throwback I’ve heard from a band formed after thrash metal’s heyday in the 80s.
From the killer riffs, to the ripping solos, and maniacal vocals sung by one extremely talented woman, Mortillery easily dominates their competition with the raw and dynamic energy that was seen on the debut albums of Thrash’s Big Four in the 80s, and brings me right back to the time when I was first discovering these great thrash albums, and gives me the same excitement.
One thing that really separates Mortillery from the rest of the crop is their vocalist, Cara. She often sings in a very clear, soaring vocal style comparable to Crystal Viper’s Marta Gabriel, but she also manages to belt out some hellishly violent screams, and some raw black metal-esque rasp (think early Bathory, Toxic Holocaust), seen very clearly on “Countless Suicides” and the title track.
'Murder Death Kill' is an album that belongs on the same shelf with 'Kill Em All', 'Killing Is My Business', and 'Fistful of Metal'. A modern day Thrash metal classic in true, pure form, Mortillery have given me what few Thrash albums can, which is the rekindling of that old feeling when thrash metal was still wonderful and new to me, and that is something absolutely priceless that should not be overlooked by anyone. Give this one a listen. [9]
(Andrew Oliver)
Mortillery MySpace