Rampart 'A Tale To Cold' review 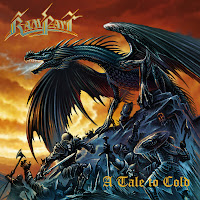 After two years of silence Rampart at last made us happy with a new production, and namely the 4-song EP 'A Tale to Cold'. From the band that recorded the first album of the group 'Voice Of The Wilderness' is left only vocalist Maria, who however, turned out to be not only a text writer and a manager, but is as a whole the main power behind Rampart. With the new musicians comes the different sound.
The song “Stronghold Of The Sun” starts with a mighty power riff and that clearly shows what is to come next. Definitely there is a difference from the songs from the first album. Speed is still there, melody also, but the guitar weaves far more complicated figures and the drum’s rhythm is quite uneven at places. It shows that the group has developed to a direction of more complicated compositions. The whole rhythm of the piece reminds us of the first album, and namely fast-paced tempo in the style of the German power school (Gamma Ray etc.), but here we find several music parts which definitely 'smell' of Angel Dust also, introducing some American power metal in the music. The chorus is very “engaging” and makes you hum sing it for hours.
The piece “Metal Shell” is an absolute razor - fast and hard with much melody and guitar harmony. My absolute favorite in the EP.
The rest two pieces are in fact an English and a French variant of the main song “A Tale to Cold”. It is more slow, but as a matter of fact quite an epic with hard and powerful guitar riffs and solos.
We can say that as a whole the EP sounds quite diverse and besides on the part of the music there is a perceptible growth on the part of Maria’s singing as well. At places, it seems to me that she sounds like Jutta Weinhold from Zed Yago. As a whole the production is at a higher level in comparison with 'Voice Of The Wilderness'.
There are some changes in the band, which actual members at the moment are: Maria D.S. (vocals), Vili Neshev (guitars), Svilen Ivanov (bass), & Peter Svetlinov (drums).
In conclusion I will say that we are looking forward to the second full-length Rampart album. [9]
(Asen Asenov)
Rampart MySpace
Inferno Records