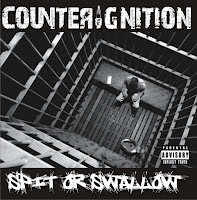 'Spit or Swallow' is a simple album. Thrash/groove metal that’s either played at break-neck speeds or with back-breaking, heavy grooves, all played with extreme aggression. We have lots of breakdowns, lots of shredding solos, and an abundance of angry growls and violent screams, that are quite similar to Phil Anselmos’s later work in Pantera.
There’s lots of brilliant heaviness and raw aggression here, and it put on a pretty spectacular first impression, but after the first full listen through the album, you realize how familiar it all sounds. Where could I have heard this before? Oh yeah! It’s called 'Vulgar Display of Power', and it came first. Tracks like “Sell Your Soul” have some really heavy, crushing riffs to flaunt, and so do most of the tracks on this album. They’re very effective in getting you pumped and angry, ready to throw a chair through a window, but really, as cool as these songs may be for the first few listens, the lack originality and generic vocals don’t warrant many repeat listens.
However, there are shining moments here, such as “Secret to You…Denied,” which shows the band can really offer some original material if they really tried. In their defence though, this album is probably the best Pantera rip off I’ve ever heard, and I’ve heard a lot. There are some really cool, memorable melodies hidden in the album, the solos are kick-ass (to say the least), and it effectively gets you pumped up. It’s not too original, but it’s cool and it’s fun. Not a bad entry in the groove/thrash genre, and I suggest that you get all the enjoyment you can from this album before it inevitably gets put down and forgotten about, because there’s definitely some enjoyment to be had here. [7]
(Andrew Oliver)