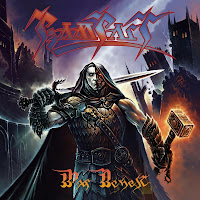 Bulgarian metal stalwarts Rampart are back on mission, this time with their sophomore CD album, following an amazing 'appetizer' cassette EP released in 2011. Change of personal more often than not equals a slight change of musical direction, a notion much evident for the band since the day axeman Vili Neshev has taken over the songwriting helm. Displaying more complex, richer, song structures and multitude of tempo changes, the music is still retaining a strong dose of melody, nicely complimented by brilliant guitar solos. Power progressive metal is quite a fitting term for this album, compared to the more orthodox traditional power-speed the band used to explore on their debut full-length, 'Voice Of The Wilderness'.
Lyrically, this is an ambitious project, billed as metal opera - to quote the band themselves: 'This conceptual piece of music consists of 10 compositions and presents an anti-utopia of war as clash of interest. In the real nature of conflict there are no losers and winners. The opposition is a result of our free will. This is a story about the restrictions of man and the decisions he could take on his way to perfection.' According to Maria (vocals) the lyrics also could be applied as a metaphor of the band's history thus far.
Starting off with an epic introduction that sets the tone of the war to come, the real battle soon begins, helped by massive, panzerfaust-like, production job. 'War Behest' is simply an awe-inspiring album and the listener would be well pleased by all of the featured ingredients - the melody-laden riffs and solos, powerful rhythm section and Maria's diverse vocal styles used throughout the tunes. Top honours go to the bone-crushing speed metal of 'Ghost Of Freedom', 'Fire Circle' (featuring a guest appearance of the violin player Sofia Vancheva from Vipera and Мъртво), the compelling epic that is 'Up In Arms' and 'Give Nothing Back'. Nothing's being left to chance - the audio aspects have been handed by Thord Klastrom of Gallows End, while the artwork is done by the well respected Bulgarian artist Dimitar Nikolov (Keep It True Fest, Ross The Boss, Sentinel Beast etc).
RAMPART are still waving the flag of power metal with pride, both domestically and abroad. Go out and see them live if they're touring near to your lair, a string of European dates has been planned for the Summer. And at any rate - order 'War Behest', which is available with a bonus disc featuring the mini 'A Tale To Cold' (review here). [9]
(Asen Asenov)
Rampart ReverbNation
Rampart MySpace
Inferno Records